AUSTIN, Texas (Sept. 19, 2020) – Michael Cooper and Blackdog Speed Shop came home race-winners and champions on Saturday at Circuit of The Americas with their 10th victory of the season in the Pirelli GT4 America Sprint Championship.

Cooper in the No. 10 Blackdog Speed Shop McLaren 570S GT4 scored a 1.229-second victory to wrap up his fourth SRO/World Challenge Drivers Championship. It also is the fourth Team title for Blackdog Speed Shop, which won its 40th GT4/GTS race since 2013. 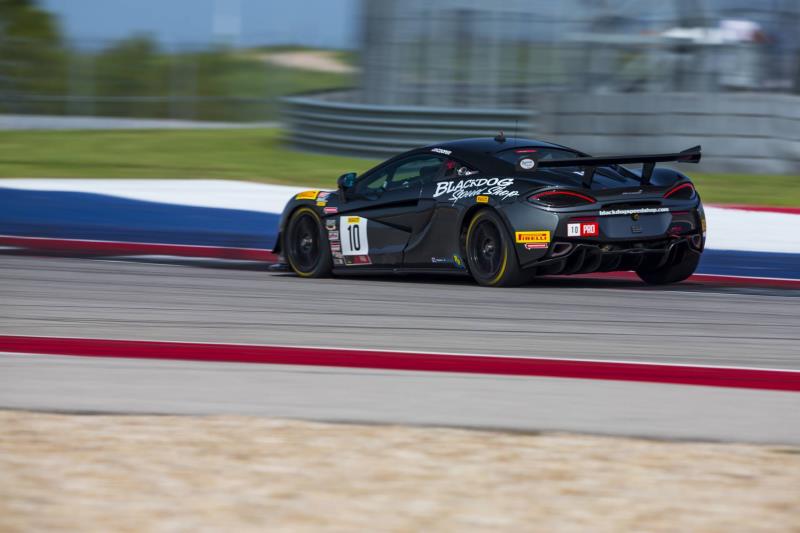 Teammate Tony Gaples came from the rear of the field in the No. 11 Blackdog Speed Shop McLaren to finish fourth in GT4 Am, just missing his sixth podium of the season. He made up three spots on the opening lap and moved to fourth midway through the race. He got as close to a half-second to the eventual third-place finisher in the waning minutes before settling for fourth.

But the day belonged to Cooper, who started from pole but ran second for the first 45 minutes. An early charge by Drew Staveley relegated the No. 10 McLaren to second on the opening lap, and Cooper trailed by as much as 1.3 seconds inside the final 15 minutes on a strategy of conserving his Pirelli tires.

It paid off. He cut the gap to 0.766 seconds with 10 minutes to go and continued putting the pressure on the race leader before a decisive move into the braking zone at the end of COTA’s long backstraight with five minutes left.

The victory was his ninth in the last 10 races and gave him his second GT4/GTS title with Blackdog Speed Shop – the first coming in 2015.

Cooper also set fastest lap of the race and will start on pole position for Sunday’s 9 a.m. CT weekend finale for GT4 Sprint. Gaples will start third in class when the race goes green, which will stream live on gt4-america.com with television coverage on CBS Sports Network set for 8:30 p.m. ET on Thursday, Sept. 24.

MICHAEL COOPER, NO. 10 BLACKDOG SPEED SHOP McLAREN 570S GT4: ‘To win another championship with Blackdog Speed Shop, which is like a family to me, is great. The results are down to the work and commitment of the team – from Tony, Ray Sorenson and everyone on down. I’m honored to drive for them and McLaren. We’ve come a long way from our first race last year with the new McLarens but kept fighting and plugging away. This championship is the result of all that work and perseverance.

‘This was a really good fight today with Drew. Both cars were really equally matched, and we were able to fight it out pretty hard and clean. It was a fun race and I hope we have another good one tomorrow.’

TONY GAPLES, NO. 11 BLACKDOG SPEED SHOP McLAREN 570S GT4: ‘Congratulations to Michael on the race win today and another championship for Blackdog Speed Shop. He’s been a great teammate and friend for several years now, and I’m proud of what he has brought to our team. At the same time, I’m really happy for everyone on the Blackdog Speed Shop team for all the work and effort they’ve put in during a really challenging season. They’re all deserving of these championships. As far as my race today, it was a nice jump at the start to gain a couple of positions on the first lap. Hopefully tomorrow I can finish a few spots higher and be on the podium with Michael.’

Blackdog Speed Shop Blackdog Speed Shop is a high-performance, custom car builder in the northern suburbs of Chicago specializing in ground-up car builds, high-performance upgrades for engines, transmissions, suspension and exhaust including computer and dyno tuning. Whether you have a modern muscle car, vintage muscle, 1930s hot rod or a foreign exotic, you will enjoy the Blackdog experience.

Ever dreamed of piloting a real World Challenge race car? Blackdog offers rental and ‘arrive and drive’ racing in addition to purpose-built cars. Call Blackdog today at (855) 4-BLACKDOG to schedule an appointment or discuss the best way to put you in the driver’s seat!